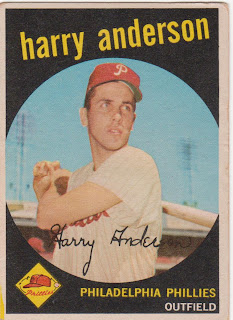 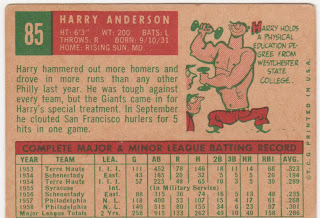 Hey, it's a black framed, Connie Mack posed, Phillie uniformed guy I've barely ever heard of. Makes it a nice card to me despite the rounded corners.
The Harry Anderson pictured here is not to be confused with Harry Anderson the annoying actor from Night Court. This Harry Anderson signed as a free agent with the Phils out of West Chester University of Pennsylvania in 1953. He was known as 'Harry the Horse' due to his 6'3" 200 lb. stature.
Well, "The Horse" had himself a nice little run as a starting outfielder in Philadelphia from 1957 through 1959. He hit .301 with 23 dingers and 97 RBIs in 1958, his best season. His star soon faded and by 1960 the Phils deemed him expendable, shipping him to the Reds. He hung on there into 1961 but by early May the eventual National League champs had sent him to the minors. With just four at bats in '61 it's highly doubtful he received a slice of the post season pie the Reds took in.
Anderson was out of baseball after spending 1962 in the minors. He's an inductee to the Delaware Sports Hall of Fame.
Posted by Commishbob at 9:49 AM