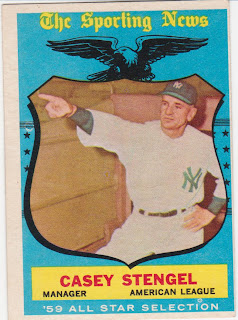 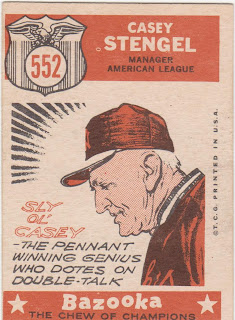 It's the Ol' Perfessor! Or, as the back of this All Star card says, "Sly Ol' Casey-The Pennant Winning Genius Who Dotes On Double-Talk". In other words, we usually don't know what he's talking about.
Stengel is one of the most talked about, most written about, most quoted and most photographed personalities in baseball history. He had great success as a manager with the talent rich Yankees of the 1950's.  But never won a thing with his other clubs.
As a player Stengel toiled as an outfielder for 14 seasons in the National League starting with the 1912 Brooklyn club. He played in three World Series, one with Boston and two others with the New York Giants. He won a championship with the Giants in '22.
He's was Hall of Fame manager and world class quote machine. But my favorite pictures of Casey comes from his days with Brooklyn. Love those shades! 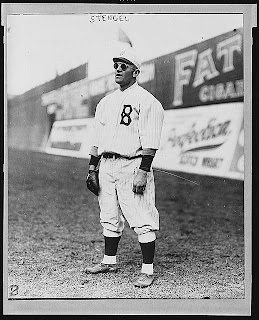 In 1959 Topps didn't have dedicated managers cards as they did in later years. But several field generals show up on special cards and NL All Star manager Fred Haney has a card in the All Star subset like this one of Stengel.
One last question... I wonder what the heck he's pointing at?
Posted by Commishbob at 7:34 AM