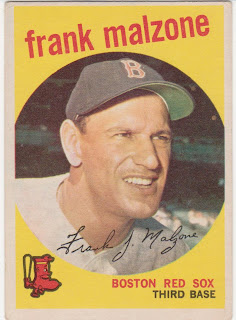 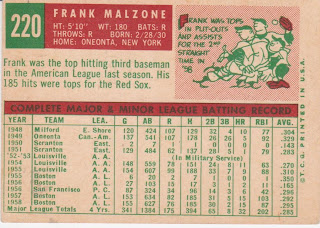 The Boston Globe touts Frank Malzone as one of, if not the best third baseman in Red Sox history.
After a couple of major league trials in '55 and '56 Malzone took over the Sox' hot corner in 1957 and held down that spot for nine seasons. Along the way he made six All Star teams and hit with decent power. He won Gold Gloves in three consecutive seasons during Brooks Robinson's career which was no mean feat. In fact he was the last American Leaguer to win a 3rd base GG before Brooks' 16 year run.
In his first start Malzone went 4 for 5 against the Orioles in Game 1 of a doubleheader on September 20, 1955. He went 2 for 5 in the second game. Not a bad way to begin a career. In 1957 he finished second to Tony Kubek in the Rookie of the Year voting, getting one first place vote to Kubek's 23. But a look at the numbers makes one wonder how Kubek could have had such an overwhelming vote margin.
Malzone retired after a one year stay with the Angels in 1966 and turned to scouting which he did for the Red Sox for 35 years. He is still employed by the Sox as a player development consultant. In 1995 he was inducted into the Red Sox' Hall of Fame.
Pretty typical  example of a 1959 Topps card. Smiling semi-profile shot against the thirdbase side stands of Yankee Stadium. Typical condition for my collection as well. Somewhat rounded corners, no longer very glossy and off centered. Always off centered.
Posted by Commishbob at 10:33 AM