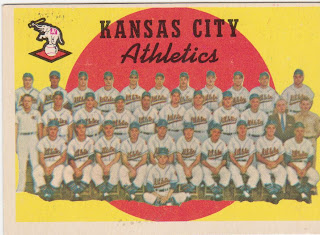 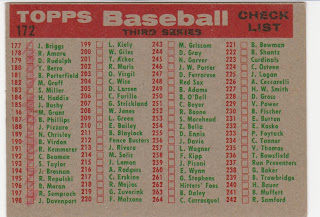 1959 was this franchises fifth in Kansas City after leaving Philadelphia. In 13 years in KC they never finished higher than sixth and were below .500 every year. Of course with Charles Finley in charge after he purchased the franchise in 1960 the A's began their slow climb respectability. Too bad they finally reached that point after they moved to Oakland in 1968.

The '59 A's featured players on their way to or from New York depending on the needs of the Yanks. Five of their regulars and seven of their ten most used pitchers went directly to or from the Yanks in deals in the second half of the decade.

My copy is a pretty nice one if you can overlook the miscut. The red and yellow motif isn't bad. It doesn't clash horribly with the team colors as some have.
Posted by Commishbob at 8:06 AM