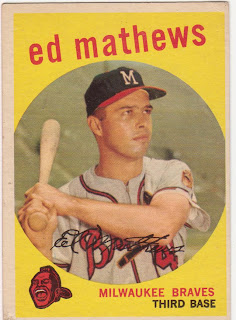 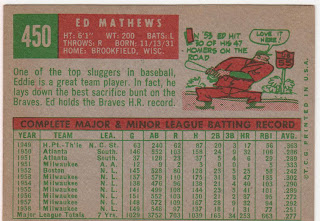 Hall of Famer Eddie Matthews (I rarely heard him referred to as 'Ed') played 'Robin' to Hanks Aaron's 'Batman' through the 50s and early 60s for the Boston (1952) and Milwaukee Braves (and one season in Atlanta).  With a smooth powerful lefthanded swing Matthews would be on anyone's short list of best third-baseman ever. Certainly among the top two or three of his era.
Matthews amassed 512 career homers, made nine NL All Star teams, finished second in the MVP voting twice (to Roy Campanella and Ernie Banks) and won two World Series rings. He played in three series total. He was an integral part of the Braves Series teams of '57/'58 and finished up his career as part of the Detroit Tigers championship in 1968 after a stint as a Houston Astro in 1967.
Matthews managed the Braves for three seasons in the early 70s and was at the helm when Hank Aaron set the career home run record. He was also featured on the cover of the first issue of Sports Illustrated. He was voted in to the Hall in his fifth year of eligibility. Why did it take five years?
Matthews' Topps card photo appears to have been taken in the LA Coliseum. Uni geeks will notice that the logo on Matthews' sleeve is different than that seen on Felix Mantilla's uniform a few days back. The Braves switched from the 'profile' to the "screaming Indian head" for the 1957 season. 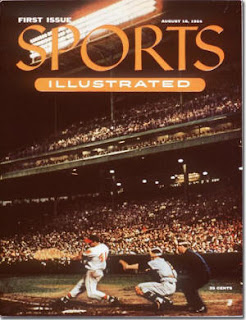 Posted by Commishbob at 7:28 AM