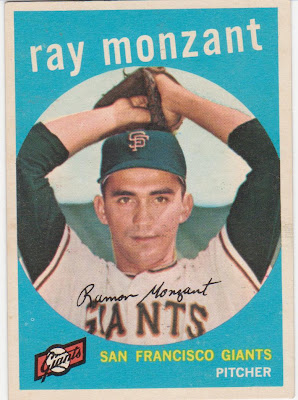 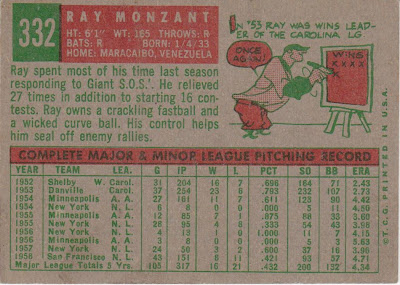 Ramon 'Ray' Monzant was a Venezuelan native who first appeared for the Giants in 1954 after a couple of very impressive minor league seasons. He sandwiched significant time in the bigs around a few trips down but never made the splash expected of a guy with his tools.

More significantly Monzant had a perchance for remaining in his native country and reporting late to camp in the spring. In fact he sat out the entire 1959 season rather than report to the Giants. He attempted a comeback in 1960 but by then his skills had let him down and the Giants appeared to have run out of patience.

Pretty standard card here for Monzant. He's one of the Giants who didn't get the oddball airbrushed SF logo on his cap. This shot looks like a straight picture. We'll see that airbrushed logo again and I've found the story behind it. By the way, Monzant appears on the 1958 card of Mike McCormick. It's an uncorrected error. And you can see the logo I mentioned if you look closely. 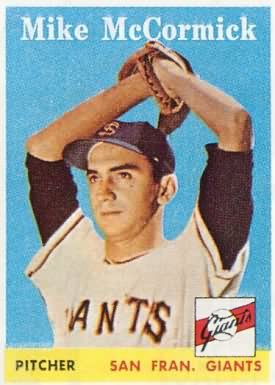 Posted by Commishbob at 7:32 AM