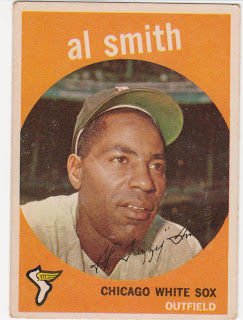 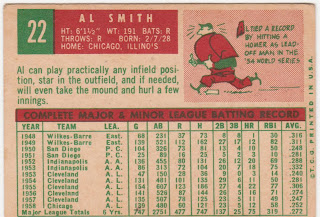 Here is Al Smith, the third in our 'Smith Week' series, and no doubt my favorite. Couple reasons for that...
1) Orange frame and 'Flying Sox' logo pretty much trumps every other card.

2) My very first real baseball glove was a Spaulding 'Al Smith' model. I still own it (along with my 1965 Wally Bunker Rawlings which I still use). 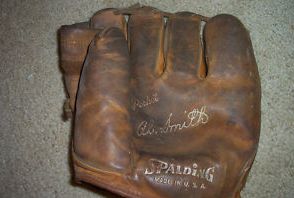 3) He signed his Topps to-be-reproduced autograph as 'Al "Fuzzy" Smith'. I love a card that shows a facsimile autograph with a nickname. It's hard to see in the scan above so here it is enlarged: 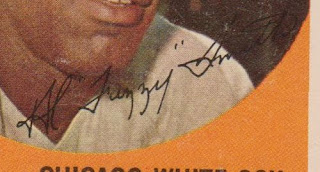 Following a brief stint in the Negro Leagues Fuzzy Smith debuted with the Indians in 1953 after being in their chain since 1948. He was an All Star in 1955 and finished third in the AL MVP voting. That season he hit over .300 and led the league with 123 runs scored to go along with 22 dingers. He led off Game 2 of the 1954 World Series with a homer for Cleveland.

After five seasons with the Tribe he was dealt to the White Sox and appeared in the 1959 Series, suffering the humiliation of getting a beer in the face while a Charlie Neal homer sailed over his head in Game Two. It's a widely seen picture taken by a Chicago Tribune staffer which, according to Wikipedia, Smith claimed to have signed 200,000 times. 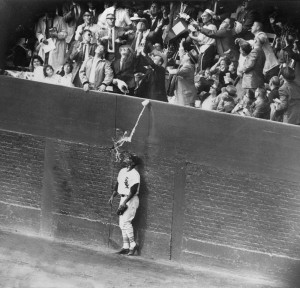 He was an All Star for the 2nd time in 1960 and was traded to the Orioles for 1963, back to the Indians for 1964 and finished with a short stint as a Red Sox to finish out that season.

Al 'Fuzzy' Smith became a parks supervisor in Chicago following his playing days. He died in 2002 at the age of 73.
Posted by Commishbob at 8:00 AM