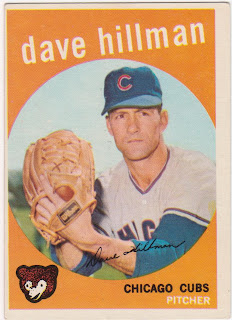 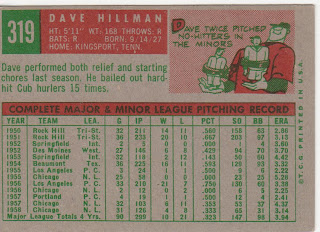 Fisrt thing that jumps out about Dave Hillman's card is the Wilson glove logo staring us in the face. Early example of product placement?
Hillman's career ran from 1955 through 1962 pitching for the Cubs, Red Sox, Reds and finishing with expansion 1962 New York Mets. Pitching for the Mets may or may not be the cause of a career change. He switched between starting and relieving roles during his three busiest seasons as a member of the Cubs.
His best season was the one that this card represents as he made 39 appearances, 24 starts, won eight games, fanned 88 guys in 191 innings and went the distance four times in 1959. All those are career bests. He had his best WHIP that year as well, 1.157. He had a say in the National League pennant race as well when he defeated the Dodgers 12-2 on September 26, forcing Los Angeles into the pennant playoff in which they beat the Braves.
Hillman did make some history when he was part of the first inter-league trade made without the inclusion of waivers. That came after the '59 year when he was dealt to the Red Sox along with Jim Marshall for Dick Gernert.
Posted by Commishbob at 7:42 AM