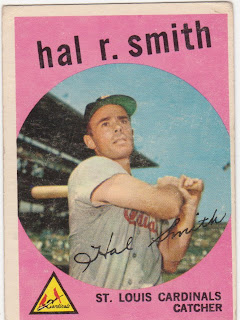 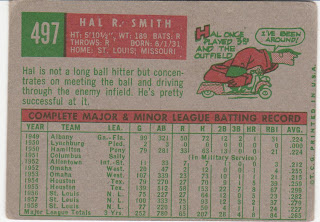 Hal R. Smith is one of two Hal Smiths in the set and to add to the confusion, both are catchers. Both also have ties to Houston which are explored deftly in this blog post by Houstonian Bill McCurdy on his local baseball and city history site.

Hal R. played for the Cardinals from 1956 through 1961. While the write up on the back of this cards states he isn't a long ball hitter he did go deep 13 times in the 1959 season. He made a couple of National League All Star clubs. He was pressed into duty and got into a few games with the Pirates while serving on their coaching staff in 1965.

Despite his seemingly common name and vanilla career Smith is a very interesting guy. I simply can't do him justice so I'll direct you to his very well put together website. Take the time to poke around those pages and treat yourself to the baseball story that mirrors the times that these cards represent.

This is one of the pink framed Cardinal cards that are attractive to me for no logical reason. This copy is plagued by soft corners and the omnipresent miscut but I'll live with it. Smith shows off his cards on his site but one jumped out at me and I have to show it here, his 1958 Topps. 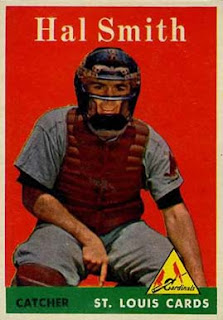 Holy Cow! Is that an amazing card or what? Full gear with that battered mask, calling for the heater? Now THAT'S a baseball card.
Posted by Commishbob at 8:28 AM