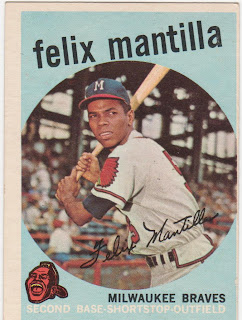 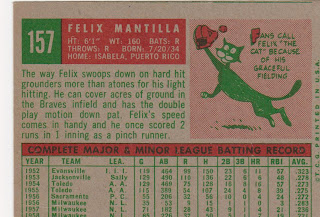 Felix Mantilla was the 12th Puerto Rican-born player to appear in the major leagues when he debuted with the Braves in 1956 and was lucky enough to wear the fabulous Milwaukee tomahawk jersey. He was also lucky enough to be on the Braves clubs that appeared in back-to-back World Series in 1957 and 1958. He earned a ring for the '57 title.
Mantilla was never an everyday player for the Braves but earned that role once he was taken by the Mets in the 1962 expansion draft. After a year with the bumbling first year team he was dealt to the Red Sox and in 1964 hit 30 homers. His 30 hr/64 rbi ratio is the second lowest in history for players with 30+ dingers.
Mantilla made his only All Star game in 1965 and, after a trade to the Astros where he played one year and a stint as Cubs property, he was out of the game by 1967.
I sure like the way the light blue frame allows the Braves' uni to take center stage here. Not the best card in the set, but in decent shape with three out of four fairly sharp corners.
Posted by Commishbob at 9:00 AM