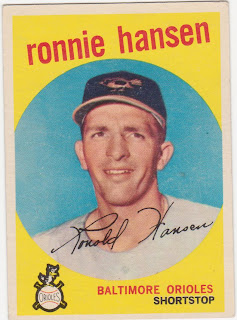 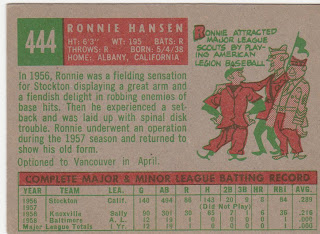 I'm sure someone out there can clarify this for me. How many players have had regular Topps cards prior to a "Rookie Stars" type card? Ron Hansen (who called him 'Ronnie' except his grandmother?) is one. This is his 'rookie' card but he has a 1960 Sport Magazine Rookie Star card a year later. That card is at the bottom.
Anyway, he was the American League Rookie of the Year in 1960. He beat out fellow Orioles Chuck Estrada and Jim Gentile. Only those three Baby Birds got votes. Cool. In my mind both of those other guys had superior numbers but I believe Hansen's standout job at the demanding shortstop position helped him garner that award.
Hansen battled back problems his whole career. They (along with a military stint in 1962) cost him whole chunks of several seasons. But even with his physical issues he showed pretty good power for a middle infielder, twice topping the 20 homer mark and regularly finishing with double digit dingers.
The O's swapped Hansen to the White Sox in a deal that brought Luis Aparicio to Charm City before the 1963 season. He held down the starting SS job there until a trade sent him to Washington in February of 1968. That deal brought Tim Cullen to the Sox. What makes that significant is that Hansen was traded back to the Sox by the Senators for Tim Cullen on August 2nd of that same season. Thus Hansen and Cullen became the only two players traded for each other twice in the same season. (As an aside... I would have figured the Yanks and A's would have pulled that trick at some point in the 50s).
1968 also gave Ron Hansen a moment in the sun when while playing for the Senators on July 30 he pulled off the first unassisted triple play in 41 years in the bottom of the first inning against the Indians. So if you are following along the triple play came three days before the trade back to the White Sox. What did Hansen do between those two landmark evens? Why he struck out six consecutive times and then hit a grand slam on August 1. I swear, the stuff you learn doing this is amazing.
My Hansen '59 card is one of the rare ones in my set that's not off center. In fact it's a pretty nice card. It's also one of the few I intentionally upgraded over an original Oriole collection example. 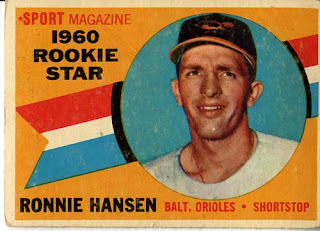 Posted by Commishbob at 7:29 AM