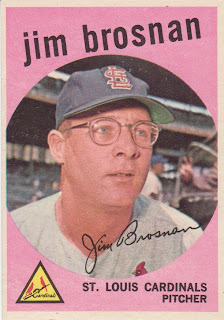 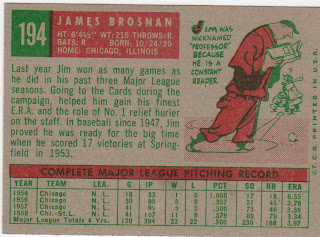 ﻿
With summer almost upon us I want to change gears for just a bit and do something a little different with the blog. To me summer (among other things) is baseball book reading time. I barely follow the current major leagues but I still love the game of baseball itself and enjoy the history and characters of baseball's past.

I thought I'd blog some cards that I can link (sometimes tenuously) to my favorite baseball books, one's that I think any fan would enjoy. Some are on every list of 'best baseball books' you can find. Others are less well known.

I'm going to skip delving in to career of the players whose cards are featured other than a few highlights. These posts are about the books.

First up is a book I am featuring because it was written by the most famous (and only?) author among the subjects of this set. It's a book I read over 20 years ago and admittedly can't remember much of. The Long Season was written by reliever Jim Brosnan and is a diary-style account of his 1959 season, one in which he was traded from the Cardinals to the Reds.

I didn't read The Long Season when it was published but I do recall the stir it (and Brosnan's next book Pennant Race) created. It was unlike most of the contemporary baseball writing and the 'inside look' at the game was pretty controversial. There isn't the "tell all" feel that came later with Jim Bouton's books but it certainly was more revealing that anything else being written.

Pennant Race is a similar account of Brosnan's 1961 season. He was fortunate enough to kept track of his doing in a year the Reds went on to the World Series.

Brosnan, known for his studious look and persona (see the cardback cartoon!) pitched nine seasons in the bigs, primarily for the Cubs, Cards and Reds. He moved from a starters role into the bullpen in 1959 and appeared in three games for the Reds in the 1961 World Series. He went 10-4 with 16 saves for that club. 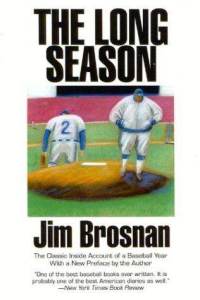 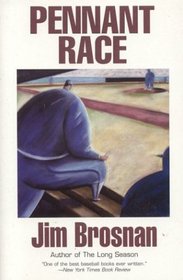 Posted by Commishbob at 7:20 AM