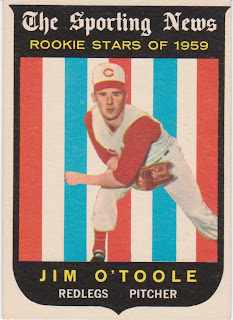 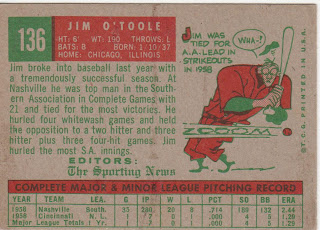 Hey, it's back to back Reds pitchers. Jim O'Toole spent only one year in the minors but it was a good one. He won 20 games with the Reds' Nashville AA affiliate in 1958 and earned himself a September 26 start with the big club. He lost a 2-1 decision to the reigning NL champion Braves and allowed only four hits and one earned run in 7 innings. He was relieved by Hal Jeffcoat who was featured yesterday.
After a shaky '59 season O'Toole came into his own with a 12-12 season in 1960. He became an elite starter in 1961 as he helped the Reds to the NL title by winning 19 games. He earned a start in the 1963 All Star game in Cleveland. He lost two games to Whitey Ford and the Yankees in the '61 Series.
O'Toole was among the better pitchers in the NL through the 1964 season when arm problems caught up with him. He struggled for three seasons and left the majors after a 1967 stint with the White Sox.
He tried to come back after spending 1968 with a couple of minor league teams, He attended spring training with the expansion Seattle Pilots cut didn't make the team. I guess he missed out on being a character in Jim Bouton's very entertaining Ball Four.
Don't know what it is about these '59 Rookie Stars cards that makes me feel 'meh'. At least my O'Toole card has nice corners.
Posted by Commishbob at 6:59 AM