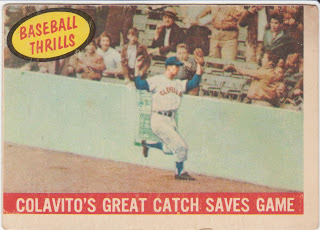 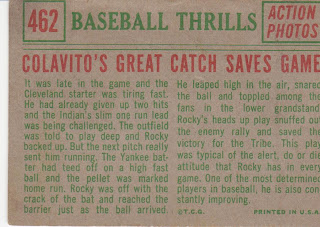 I can always find what I'm looking for on the 'Net. Well, almost always. I wanted to find out which game this catch by Rocky Colavito occurred in and I thought it would be a pretty easy task. The back of the card tells us that Indians held a 'slim one run lead', that there had been two hits already (I assume in that inning), that the starter was still pitching, that it was 'late in the game' and that Colavito's catch saved a Cleveland win. Odd that there is no mention of the date or even year but no matter, my goggling would find the game in no time. Or so I thought.
I googled it several different ways but I drew blanks. Strange. But I did find dozens and dozens of references to an incident when Colativo went into the stands at Yankee Stadium.  And innumerable references to the trade that sent the immensely popular 'Rock' to the Tigers in exchange for Harvey Kuenn. And I found this picture, obviously the original black and white image used for the card, in a forum post that says the catch was made of off the bat of Hank Bauer. But it says nothing else. 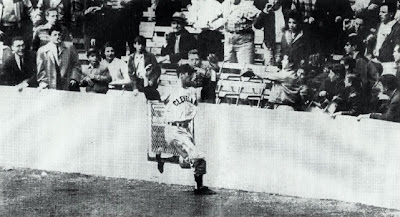 Undaunted I went to work mucking through Baseball Reference looking at box scores. I checked all Indian games at Yankee Stadium from 1956 through early 1959. I eliminated all Indian losses or lopsided wins. I couldn't find any game that fit the card's parameters exactly. I assumed that Rocky's catch ended an inning, and that there had been two hits in the inning prior to the third out being made by Colavito. I went through all the possible games several times and found nothing.
I did find that on May 9, 1956 Colivito made the final out with a catch in the ninth inning in a 6-5 Indian win at the Stadium but there was only one runner on via a single hit and the Indian starter was long gone by that point. And it had been Gil McDougald who had hit the ball. (I am dubious as to the accuracy of the Bauer reference anyway.)
Colavito had made the final out on a fly off the bat of Elston Howard on September 11, 1957 but that Indians were ahead by two that inning and there were no runners on.
EDIT: This page at the Hall of Fame's Dressed to the Nines uniform database helps narrow the timeline to 1956/1957. The Indian's away jersey that Colavito is wearing was gone by 1958.
On June 8, 1958 the Yanks trailed by a run for most of the 'late game' action but nothing reselbling a catch by Colavito was made with even one runner on. He did make a catch in the bottom of the sixth after a double by Andy Carey but no other runner was on and the catch came with one out. There were two singles with two outs in the bottom of the 7th but Norm Sieburn popped to the catcher. That game is a remote possibility if you give Topps some 'fudge' room.
Then there is August 19 of that season. In the bottom of the 8th the Inidans are up by two runs, the starter has been lifted and the Yanks put two runners on with a walk and a single and Colavito makes a catch to end the inning. Again the catch makes it a possibility but none of the other 'facts' match up.
On May 12, 1959 (I figured there was a very small chance the catch came early in the season the card was issued) the Indians beat the Yanks by a run but Colavito made no putouts at all.
So there I am, back where I started. I know the catch happened but unless I can find the picture in a newspaper archive I'm giving up. And I have been through the boxscores/summaries twice. But it'll bug the hell outta me at night for awhile. 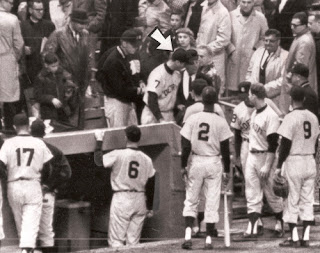 Posted by Commishbob at 7:46 AM