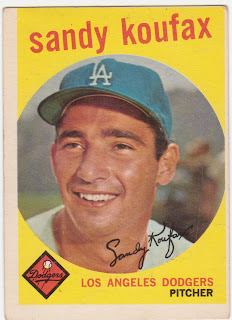 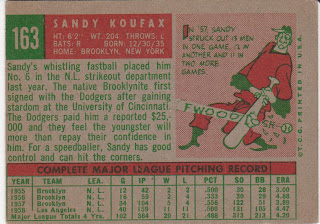 Well what better way to rebound from the mundane adventures of the five Smiths than a card of the best lefty I've ever seen, Hall of Famer Sandy Koufax.

There isn't much I can contribute here to what can be found in dozens of other places on the web about Koufax. He (like myself) has Brooklyn connections. He attended Lafayette High School which is where my father would have attended had he not opted for a specialized school in the Bronx. He attended the University of Cincinnati and walked on to their basketball team. And after tryouts with other clubs he caught the eye of the Dodgers and was signed as a 'bonus baby'. He languished in the bullpen with the Dodgers while trying to harness his amazing talents. His career blossomed in 1961 with an 18 win season and he never looked back.

In a 12 year career, Koufax had a 165–87 record with a 2.76 ERA, 2,396 strikeouts, 137 complete games, and he tossed 40 shutouts. He had 4 no-hitters including a perfect game. I saw him pitch once in person, in Shea Stadium on June 5, 1966, his final season. It was the first game of a doubleheader. He shut down the Mets, had two hits himself and prompted my father to want to leave between games saying "We've seen Koufax, why hang around for the next guy [Joe Moeller]?"

Koufax, of course, went out on top following the Dodgers' four game loss to my Orioles in the World Series. I take a little pride in the fact that my team was the last team to beat Sandy Koufax, besting him in Game Two.

I have all of Koufax' regular issue Topps cards. This is among my favorites. It's a nice portrait of a smiling Koufax that shows a different part of his normally austere persona. I hardily recommend Jane Leavy's biography of Koufax. It delves into his life on and off the field through the prism of his 1965 perfect game. Well worth the read.
Posted by Commishbob at 7:22 AM