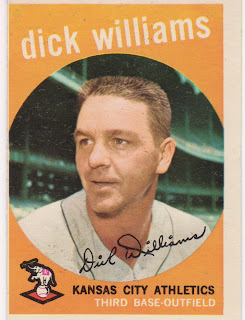 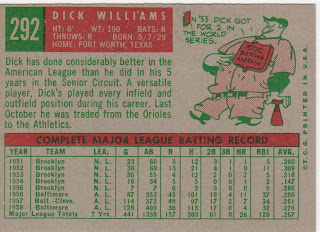 Dick Williams broke into the majors in '51 with the Brooklyn Dodgers and kicked around the Dodger chain, making appearances most years on the big club, until he was traded to the Orioles early in the 1956 season.
It was in Baltimore that Williams made himself over. He morphed into a weak armed outfielder (he had injured his shoulder) into the quintessential utility guy playing nearly full time and anywhere he was needed on a particular day. He served in that role through three different stints with the O's bracketing stops in Kansas City and Cleveland. He finished up in Boston for a couple of years ending in 1964.
Along the way he earned a reputation as a hard-nosed bench jockey (i.e. jack ass) which naturally led to a job as a coach in the Bosox chain followed quickly by a shot at their AAA clubs manager in 1965. Success at that level got him a contract as Red Sox manager in 1967 and he promptly took them to the Impossible Dream pennant.
Despite losing to St. Louis in the Series that season Williams had established himself as a manager to be reckoned with. His 'style' of managing, while producing success on the field, seemed to have caused him to wear out his welcome in several towns.
There is no denying his abilities though. He won four pennants (with three different clubs, a rare feat), led four different clubs to 90 win seasons (only Lou Pinella has also done this), and was only the second manager to lead three teams to the World Series. Paul Richards thought so much of Dick Williams as a player that he kept trading for the guy. Richards passed along some of his managing ability to his protege if not his people skills.
Williams continued to manage after his MLB career ended by spending a year at the helm of a franchise in the Senior Pro BB Association. He was elected to the Hall of Fame (as a manager) by the Veterans Committee in 2008.
He's pictured here on a KC Athletics card. Topps used a picture taken hatless as he posed in Yankee Stadium while with the Orioles. Seems to me that the brush-cut Williams looks very different from how he'd look in his managing days. Weird to see him without his moustache.
Posted by Commishbob at 7:33 AM