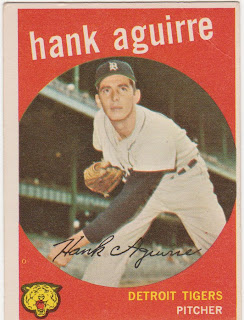 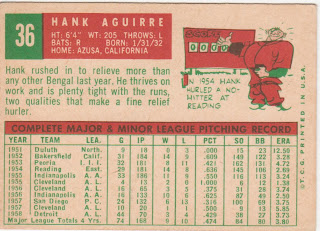 I've been really lucky. I've gotten to see some cool things in ballparks, stadiums and arenas throughout my life. One of my favorite memories comes from an otherwise unremarkable trip to Yankee Stadium in June of 1967. It was a Sunday doubleheader, we went to a lot of those. This time the Tigers were in town and in a quick first game the Yankees' Al Downing took care of Mickey Lolich and company, 5-0. I remember nothing about that game. The second game, however, produced a golden moment of my life as a baseball fan. Tiger starter Hank Aguirre, one of the worst hitter of his or any era, stepped up to the plate in the top of the second with the bases loaded. Aguirre swung and bat met ball sending it deep into the Stadium outfield, splitting the outfielders and bouncing off one of the famous monuments. Aguirre loped (I remember him 'loping') and ended up at third with his only career triple. He sat on the base laughing for a moment.
I had hoped there might be a video someplace. Didn't find one but I did manage to find several references to Aguirre's triple through the magic of Google. Those pages were the first references I'd seen of his joking threat to steal home! And I hadn't remembered that the Yanks had walked Ray Oyler to get to Aguirre.
Hank Aguirre, Californian of Mexican descent, began his career with the Indians in 1955 pitching in parts of three seasons as he split his time between the Tribe and the minors. After a trade to the Tigers Aguirre worked regularly out of their bullpen with a detour to the minors in '59.
In 1962 he became a member of the Tiger starting staff and won a career high 16 games, led the league with a 2.21 ERA and made his only All Star squad. By 1967 he was back in the bullpen. Ironically the game I witnessed was his only start of that season and in it he made his only two at bats.
He pitched for the Dodgers in 1968 and ended his career with a stay on the Cubs staff during 1969/1970. He retired to a life as a businessman/entrepreneur and even inspired a book about his life targeted to young teens.
How's that for a card story?
Posted by Commishbob at 7:39 AM