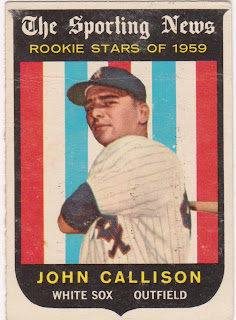 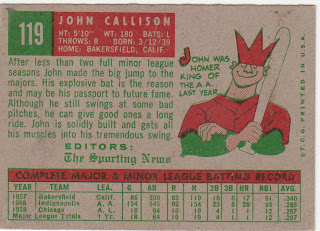 If I ever had a National League team when I was growing up it was the mid-60s Phils. Don't know why but I suspect I was just trying to be different from my friends who were Giant, Met and Dodger fans. That seems like something I'd do.

And if I had a favorite on the Phillies it was Johnny Callison. He came up with the White Sox but made his career with the Phils. He was several time All Star with good power, a touch of speed and played right field smoothly. In 1964 he was runner-up to Ken Boyer in the MVP voting in the NL and was the MVP of the All Star Game. He earned that honor with his walk off three run dinger off Red Sox' closer Dick Radatz.  He led the NL in triples a couple of times, doubles once. Stints with the Yankees and Cubs came as his playing days wound down.

My copy is the first one I've dealt with that has the ragged border I associate with Topps 70s cards and especially O-Pee-Chees. Then there's the crease across the top of Johnny's head to say nothing of the scuff in the upper left. This card looks better in person than it does in the scan. You'll have to trust me on this one. I really like the back of the card blurb which asserts that "...he still swings at some bad pitches...". LOL Nice.
Posted by Commishbob at 8:08 AM