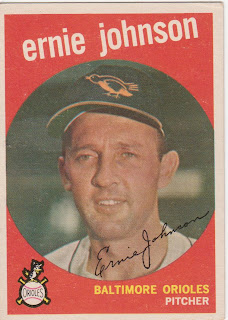 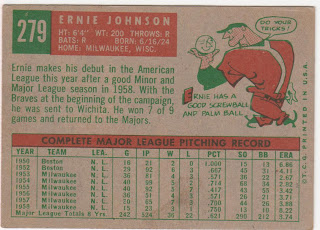 Ernie Johnson hardly spent a moment of his life outside the Braves organization. 1959 was his final season as an active player and the only year he was employed by some other club. He debuted in 1950 with the Boston Braves after nearly a decade in their chain with a three year stint in the military.
He was almost exclusively a reliever making 19 career starts, 10 of those in his first full year in the bigs, 1952. He was a steady if unspectacular performer for most of the decade.
He pitched well in three appearances in the '57 World series allowing only two hits in seven innings. One of those hits however, was Hank Bauer's Game Six winning homer. In 1958 he split the season between the Braves and their AAA club and was then released. He hooked on with the Orioles for 1959 but was released after that and signed with the Indians but was cut prior to the 1960 season.
He made one start for the O's in 1959 coming on May 29 at Yankee Stadium. That's notable because after allowing two hits and two unearned runs to the Yankees in the first he was pinch hit for in the top of the second. The Orioles went into the game a game and a half behind Cleveland in the standings but only two months in to the season it's hard to picture Paul Richards having that quick a trigger, even for a guy making his first start in several years. I've dug up some game stories but no mention is made of any reason for the quick departure of the O's starter.
Johnson  moved into the Braves broadcasting booth in 1962 and continued as their voice until he retired in 1999. He's a member of the Braves' Hall of Fame and has support for induction into the Baseball Hall as well. He had the unique pleasure of working with his son as Braves broadcasters for several seasons in the 1990's. Ernie Johnson Jr. is TBS' basketball host and broadcaster.
This card shows Ernie in an Orioles cap but that has to be an airbrushed logo. He wouldn't have been in an available picture in anything other than a Braves cap. Topps did a pretty good job of it, though. Good enough to pass a casual inspection anyway. Airbrush or not it's a nice portrait and unusual in that the red frame on an Oriole card is a rare occurrence.
My copy is middle of the pack condition wise. Far from mint but nice for an ungraded '59.
Posted by Commishbob at 8:10 AM