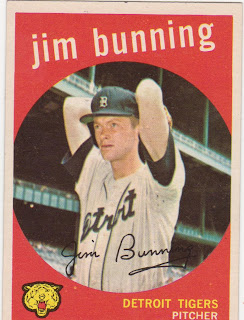 Jim Bunning's pitching career was long and distinguished. On the other hand (pun intended) his political career has been, well, long.
And that's the end on my editorializing.
Jim Bunning began in the Tigers' chain in 1950 and, after 39 appearances over the course of the '55 and '56 seasons, he made a huge splash in 1957. He boasted a 20-8 record and 2.69 ERA that year. In 1958 he pitched the first of two no-hitters, beating the Red Sox on July 20th in the first game of a doubleheader. Over the next five seasons he pitched exceptionally well for the Tigers though he never matched his 20 win first full year.
He was traded to the Phillies in time to be in the middle of their monumental collapse down the stretch in 1964. Phils' manager Gene Mauch rode Bunning and co-ace Chris Short too hard, having them go on 2 or 3 days rest, and the Phils' lead disappeared as the Cardinals took the flag.
Bunning's brightest moment on the field also came in 1964 as he pitched a perfect game against the Mets on June 21 of that year. As a Phillie Jim Bunning had three consecutive 19 win seasons and he won 17 in 1967 before being dealt to the Pirates in 1968. A sting there and then ones with the Dodgers and Phils (again) marked the downhill side of the righthander's career.
Bunning was #2 on the all time strikeout list at the time of his retirement and his 224 wins earned him induction into baseball's Hall of Fame in 1996 via voting by the Veterans Committee.
My copy of this card came 'slabbed' by one of the grading companies but I 'jailbroke' it. I hate those plastic encased cards. What fun is a card if you can't feel it? Know what I mean?
Posted by Commishbob at 7:54 AM