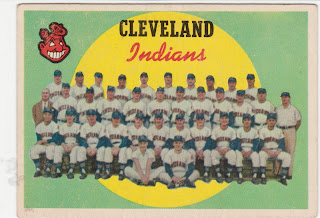 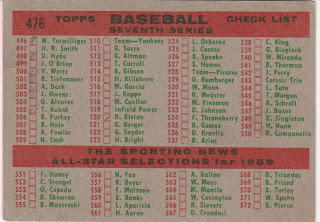 OK, sea-foam green and yellow are not the Tribe's colors (or anyone else's as far as I know) but they don't look to bad on a 1959 Topps team card/checklist. I don't know why Topps didn't just use a 'frame' for their team cards like the regular single player cards and leave the center circle as a 'complete' photo. background and all. Oh well.

The 1959 Indians, five years removed from their 1954 World Series appearance and coming off two essentually .500 seasons, finished second to the White Sox in the American League in 1959. Second in the standings anyway. They finish second to NONE when it came to personalities. Minnie Minoso, Rocky Colovito and Jimmy Piersall made up the outfield. Vic Power and Billy Martin were on the right side of the infield. Holding down the job of staff ace was the colorful and spectacularly named Calvin Coolidge Julius Caesar Tuskahoma "Cal" McLish.

While my copy has a few gum stains (gum stain removal tricks anyone?) and soft corners the back has only a few checkboxes filled with pencil marks. The 7th (final) series is featured and a lot of kids back then had quit buying baseball cards when those higher numbers were released.
Posted by Commishbob at 8:16 AM