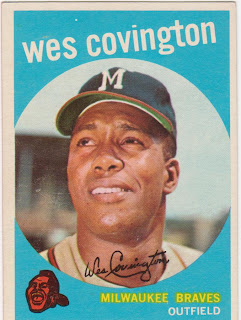 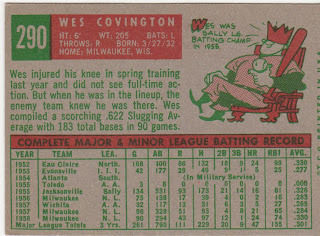 Wes Covington is shown here in his Milwaukee uni but my memories of him come from his days on the Phillies in the mid 60s. Those clubs were favorites of mine as was noted Sunday in my Johnny Callison post.
Covington began in the Braves chain in 1952 and hit the bigs in 1956. He contributed a lot to the Milwaukee clubs that appeared in back-to-back World Series' in '57/'58. His 1958 numbers were especially impressive as he .329 with 24 homers in less than 400 at bats.
He had a whirlwind 1961 season as he became one of only nine players in MLB history to play for four different clubs in a season. He opened the year with the Braves, was claimed on waivers by the White Sox in May, was dealt to the A's in June and traded again to the Phils in July. I hope he didn't sign any long term leases that summer.
Wes had some solid seasons for those contending Philly clubs that I watched closely until he moved along to the Cubs and Dodgers to finish out his career in 1966. After his playing days he worked in the sporting goods business, in the newspaper business and returned to baseball as an executive with the PCL's Edmonton franchise.
My copy of this card is better than average (for my set) with moderately sharp corners and a nice gloss. I always love those Braves' "M" lids.
Posted by Commishbob at 7:32 AM