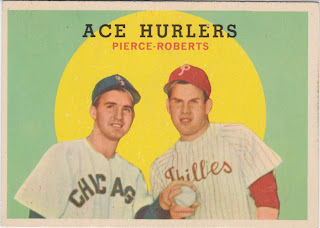 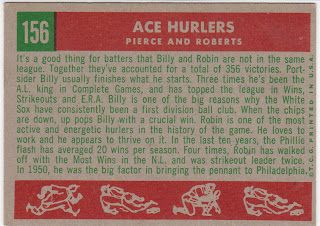 Here's Billy Pierce again, this time alongside Hall of Famer Robin Roberts. This is one of those 'friendly rivals' cards that Topps favored back in the day. You'd see shots like this in the paper the morning of an All Star game or Game One of the World Series. The two starting pitchers posing like they are old buds from the neighborhood.
This shot is most certainly from an All Star Game, either 1953 or 1955. Roberts and Pierce faced off in both of those games. Now which one is it? My first stop was the "Dressed to the Nines" site to see if I could tell anything from Pierce's jersey since the Phils' shirts never change. Here is what they have for 1955 and 1953. I thought I could detect a hint of a red border on the lettering of Pierce's shirt on the card so I assumed it was 1953. Then after more digging I found this picture on an eBAY listing: 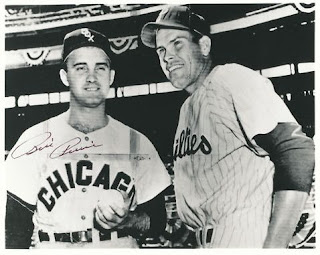 The item was listed as a 1955 All Star picture. And that sure looks like County Stadium in the background so I will conclude that it is Milwaukee's game in '55. Does this news shot look like it was taken at about the same time, slightly different pose as the picture on the card? On the Topps card Pierce has his sleeve pulled down to his wrist but in the eBay pic they are at mid-forearm. And does Roberts look younger in the card than in the 1955 shot?
Hell, I can't say one way or another. And now, with about 32 tabs open in Chrome that relate to the games and players involved, I really don't care.
BTW... the NL won both of those games but Pierce had the better numbers going total of 6 innings allowing only two hits. Roberts pitched well in '53 but was shelled in the first inning of the '53 contest allowing four runs  highlighted by a three run Mickey Mantle blast.
Posted by Commishbob at 7:23 AM