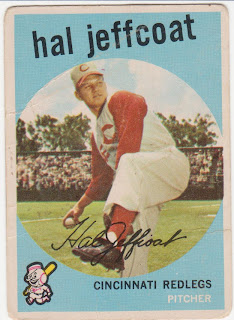 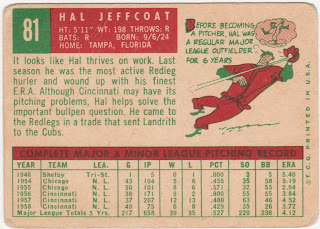 Hal Jeffcoat began his career as an outfielder breaking in with the Chicago Cubs in 1948. But a weak bat led to his getting less and less playing time on the next several years. He had decent averages but no power. The Cubs saw something in his powerful arm however and turned him into a reliever.
Two years in the Cubs' pen produced mixed results and in 1956 he was dealt to the Reds where he was eased into a starting role. He went 12-13 in 31 starts in 1957 and then returned to the bullpen for good, never making another start. In the summer of '59 he was dealt to the Cardinals but was out of the bigs after that season.
A season pitching in the PCL and a year as a minor league manager completed Jeffcoat's baseball days.
My Hal Jeffcoat card is among the worst in my set. Corners are very soft and rounded. I'm putting this one on my 'upgrade' list for sure. It's another of the Reds' spring training photos that have cropped up in this set. But the baby blue frame 'pales' in comparison to the black one we've seen previously.
Posted by Commishbob at 7:12 AM