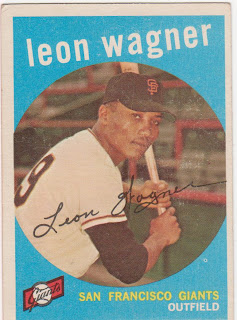 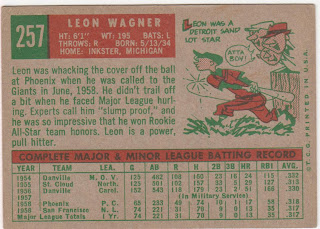 The most interesting guys have the coolest nicknames don't you think? Leon "Daddy Wags" Wagner is a case in point. Wagner, a product of Tuskegee University, signed with the New York Giants in 1954 and meda his debut with the San Francisco version of that franchise in June of '58.
After a couple of seasons of limited playing time he was traded to St. Louis who in turn dealt him a year later to the independent Toronto Maple Leafs of the International League in time for the 1961 season. In April of that season he was dealt to the expansion Angels and Wagner's career took a turn for the better.
In three seasons with the Angels and four with the Indians (a trade which reportedly prompted his comment  "Nothing against Cleveland, but I'd rather have been traded somewhere in the United States.") he had double digit homers and made a couple of All Star squads. The Indians traded him to Chicago in '68 as his numbers fell off. He was briefly property of the Reds but was sent back to the White Sox prior to the opening day of 1969 and promptly released. After signing with the Giants in May he finished out the season there and then Wagner was back in the minors for a couple of seasons before retiring.
Along the way Wagner had opened a clothing store in L.A. which used the tagline "Get your rags from Daddy Wags". Post career he dabbled in film but his life spiraled downhill due mainly to substance abuse and he died homeless in Los Angeles in 2004. There is much about Wagner on the 'Net with this story on a Cleveland based web site/blog being the most interesting I've found.
My Wagner is a little scuffed, miscut and a bit battered. Doesn't matter. I like the blue frame and how the pose shows Wagner's intensity and his 'split hands' grip.
Posted by Commishbob at 7:42 AM