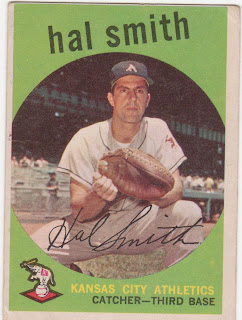 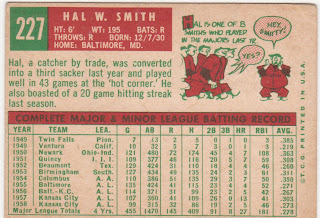 What, the other Hal Smith? Yup.. I present Hal W. Smith of the Kansas City A's. This Hal Smith was also a catcher (although he did tinker with a fielder's glove some for a bit) and he also had a Houston connection. I refer you again to this blog post about the two Hal Smiths.

Hal W. Smith was signed by the Yankees in 1949, hit well in their minor league chain and came to the O's in one of the biggest trades in major league history. Biggest in numbers if not names. 17 players moved in that transaction in November of  1954. After a little more than a season and a half as the O's regular catcher he was traded to the A's and went on to play for the Pirates, Colt 45s and finally had a cup of coffee with the Reds.

Along the way he had a moment in the sun when he returned to haunt his original club, the Yankees, in the final game of the 1960 World Series. He delivered an eighth-inning, three-run, pinch-hit homer to give Pittsburgh a 9-7 lead in the game they ultimately won on Bill Mazeroski's ninth-inning HR.


This copy of Hal's card shows him posing near the visitors' dugout at Yankee Stadium. What doesn't show up in the scan is the seriously dinged bottom left corner.


We've seen the end of the 'Hal' Smiths, but certainly "Smith Week" is far from over on this blog.
Posted by Commishbob at 8:23 AM