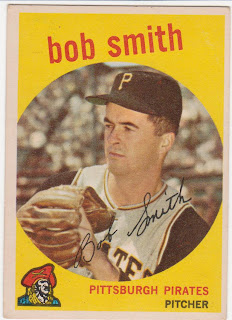 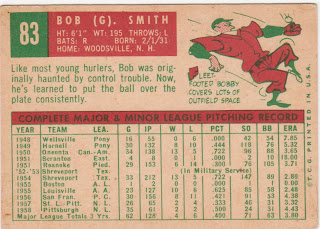 EDIT: Blogger's server down time has things screwed up. This Bob Smith post is being re-published after its mysterious disappearance.

This is the fifth of our Smiths... Bob Smith.... left-handed pitcher with four big league clubs between 1955 and 1959. To confuse matters his middle name is Gilchrist which makes him another Bob (or Bobby) G. Smith. And to further complicate matters there was another Bob Smith that was his teammate on the Louisville club in 1955. THAT Bob Smith was Bob Walkup Smith, a lefty pitcher who bang around the bigs for a couple of clubs in 1958/59. I'm damn glad HE didn't have a card in this set. My head is spinning.
This Bob Smith was primarily a middle reliever having made eight starts among his 91 games. He finished with a 4-9 record and a 4.05 ERA.
I don't think I am the only one who was thrown by all the Hal/Bob/Bobby Smith. The cartoon on the back of the card mentions how much outfield space he covers. Look familiar? It should, we saw the same text with  similar artwork on the back of Bobby G. Smith's card. That guy is the outfielder. Looks like Topps got it wrong, but who can blame them? 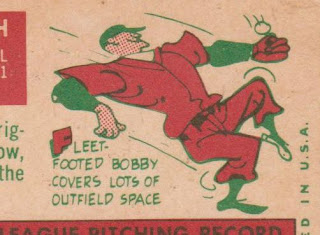 Posted by Commishbob at 7:02 AM