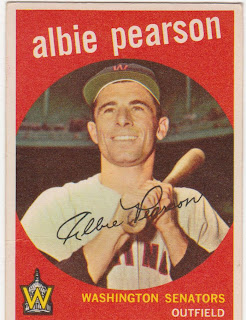 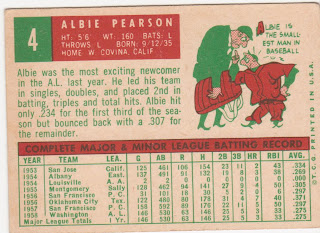 The Red Sox signed Albie Pearson as a pitcher in 1953. He was pressed into service as an outfielder and found a home there. And through the years he's made a 'cottage industry' out of being short.
He was dealt to Washington broke into the majors with the Senators in 1958 after a mostly successful trip through the Bosox minor league chain. He made good on the flyer the Nats had taken by grabbing a starting spot in the outfield and earning AL Rookie of the Year honors.
Plagued with back problems Pearson was an off and on performer and in 1959 he began in the 'off' position and was traded to the Orioles where he stayed until he was selected by the Los Angeles Angels in the 1961 expansion draft.
Albie was the first player to cross the plate for the new franchise and went on to a nice three year run with the Halos. He led the league in runs scored in 1962 and made the AL All Star team in '63. Injuries again cut into his time and effectiveness and he eventually retired following the 1966 season.
Since his retirement Pearson has served as an ordained minister and he and his wife established Father's Heart Ranch in Desert Hot Springs, California, a home for abused, neglected and abandoned boys. His foundation feeds Zambian youth who have lost their family to AIDS.
Certainly Albie Pearson has had a life well lived.
My Pearson card is about par for the course in this set. Decent corners, somewhat mis-cut but clean and bright. I really do like the red and green on cream cardboard reverse. It's my favorite among the various combinations you find in the '59s.
Albie is smiling in Yankee Stadium with the upper deck in the background. My Dad and I probably sat in a dozen of those seats that are visible in this card.
And the small man (every reference to Albie makes note of his size) got himself a small numbered card.
Posted by Commishbob at 8:19 AM