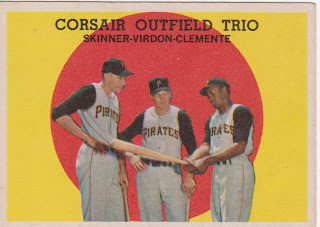 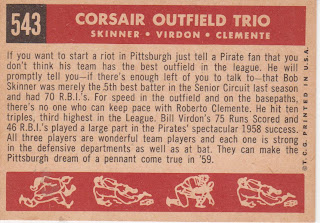 One of the great mysteries of my youth was....what the hell is a "corsair"? I figured it had something to do with pirates but I was never sure.
Each of these guys has their own card in the set (I looked at Bob Skinner last month) so I'll comment only on the card itself.
It's the best of three copies of this high number that I own. I pulled one from a $1 bin at a card show in January which looked like it had spent several summers in the spokes of a daredevil kid's bike. I bought it anyway just to have a copy as at that point I was getting anxious to finish the high numbers cheaply.
I replaced that with an eBAY buy which turned out to be one of several in a lot that all looked a lot better in the listing than they looked when they arrived. I finally bought this one off eBAY for a better price and it's really in nice shape. I got a bargain after I'd jumped through the previous hoops.
Posted by Commishbob at 7:31 AM