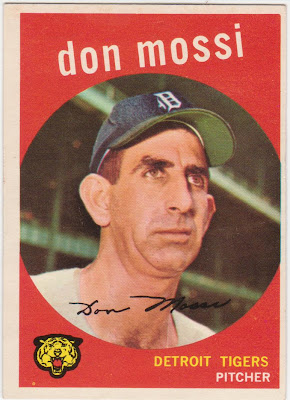 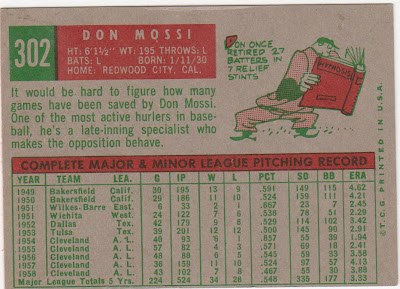 No cheap Don Mossi jokes from me. Sure he had those big ears and sad, hound dog looks but he was a very good major league pitcher for a number of years. And by all accounts he was a darn nice guy to boot.  There are plenty of places to get a chuckle at Mossi's expense. Just google him and you'll find clever stuff about Mossi written by nearly every blogger and Bill James, too.

OK, so he isn't Don Drysdale, he was a guy who answered the call for several American League clubs in the 50s and 60s and did a nice job in whatever role he was asked to fill.

Mossi originally signed with the Indians in 1949 and worked his way through the minors, debuting in 1954 with the Tribe. That was a nice year to debut since Cleveland made it to the World Series. After a season where he went 6-1 with 7 saves and a sub 2.00 ERA Mossi got into three games in the Series, pitched four innings and didn't allow a run.

After a couple more seasons working out of the Indians bullpen as a lefty compliment to righty Ray Narleski, Mossi was handed a starters slot in 1957 and he won 11 games. Then it was back to the pen for 1958 and following that a trade to the Tigers for 1959.

He started for five seasons in Detroit, winning 59 games then rounded out his career with a season each with the White Sox and Athletics. He wound up with 101 wins along with 80 losses, and All Star appearance (1957) and that World Series experience. All in all, not a bad career.

Red framed, airbrushed shot in Yankee Stadium. Seen these before. I will give credit to the Topps airbrush guy. He restrained what had to be an overwhelming urge to tinker with stuff other than Mossi's cap logo. Does that count as a cheap Don Mossi joke?

Posted by Commishbob at 7:52 AM