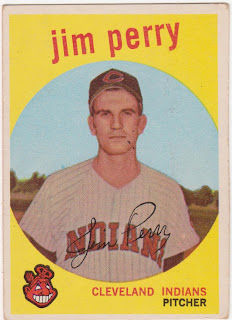 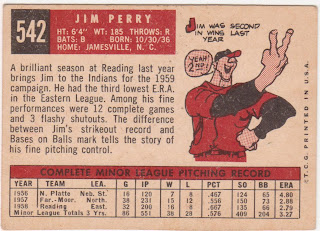 Jim Perry is less well known than his Hall of Fame brother Gaylord but he put together a fine career in his own right. This card, his rookie cardboard, shows him as be broke in with the '59 Indians. He won 12 games with an ERA of 2.65 making 13 starts among 44 appearances. He was Rookie of the Year runner-up to Bobby Allison.
The following season he won 18 games to lead the AL and had 4 shutouts. In a fraction over four seasons with the Tribe he won 52 games. He was dealt to the Twin in May of '63 for Jack Kralick, a steal for Minnesota as it turned out. Perry was a mainstay of the Twins' staff for much of the 60s culminating with back to back sterling years in 1969/1970. He won 20 and 24 games in those years and helped the Twins make the postseason. He was the 1970 AL Cy Young winner. Prior to that he had a fine 12 win season in '65 to help Minnesota make the World Series.
Perry's career slid a bit after that as he struggled to stay above .500, landing back in Cleveland for the '74 season where he won 17 games. He finished up in 1975 with Cleveland and Oakland.
Finally a fairly decently centered card. It's a high number. I wish Topps had used the red and black scheme on the back of this whole set. But it does make a high number easy to spot.
Posted by Commishbob at 8:10 AM