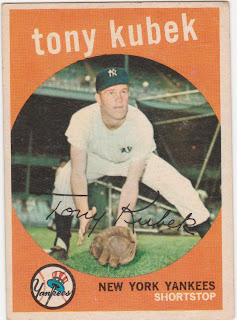 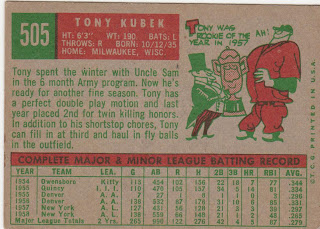 Another orange frame card. This time a Yankee which is a rare occurence, most Yankee cards in the '59 set are red framed. Whatever. It isn't the best on my set but it's not nearly the worst. Very presentable (is that an official card grade?)

Tony Kubek broke into the majors with the 1957 Yankees and spent the year batting near .300 and  playing a little bit of everything in the Bronx. It all added up to a Rookie of the Year award for the Wisconsin native. He capped off the year with a standout World Series performance in a losing effort against the Braves. He had a pair of homers among his eight hits in the Series.

Kubek went on to play nine seasons in New York but, despite the fact he made several All Star squads and played a solid shortstop next to Bobby Richardson, he never was able to completely fulfill the promise of that rookie season.

Kubek played in six World Series with the Yanks and won three rings. He gained a measure of noteriety when he took a Bill Virdon bad hop grounder in the throat in the eighth inning of Game 7 of the '60 Series. Virdon reached safely and the Pirates were able to rally and go on to win the Series on Bill Mazeroski's homer.

It was never determined*, not even by Kubek himself, if the shot to his throat was responsible for the vertebrae problems that shortened his career. He retired after the 1965 season, moving to the broadcast booth as NBC's Game of the Week analyst.

He worked on that broadcast with Curt Gowdy and Bob Costas among others. In my opinion he's the best analyst of baseball I've ever heard. He was also a broadcaster for the Blue Jays and worked in the Yankee booth following NBC's losing of the GOTW contract. He retired after the 1994 season, reportedly disillusioned by the MLB strike.

Following his retirement he's lived in Wisconsin and doing charitable work. He was elected to the broadcast wing of the baseball Hall of Fame in 2009.

*=this is a link to a story on Bleacher Report probably the least reliable site possible for anything sports related. But I found it interesting. I just feel obligated to post a warning. ;-)
Posted by Commishbob at 7:53 AM