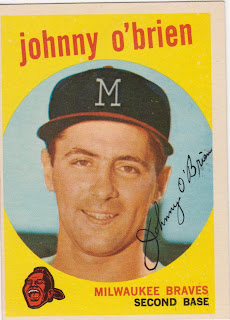 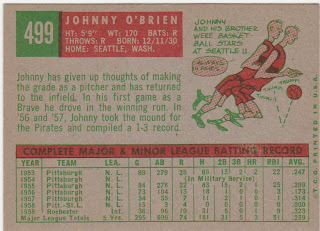 Johnny O'Brien played six seasons in the National League, primarily with the Pirates. End of story? Not hardly.
First of all he's one half of the 'O'Brien Twins'. His brother Eddie was his double play partner with the Pirates in their rookie year of 1953. That season they both played exactly 89 games. They served in the military in 1954 and returned to the Bucs in '55.
In that '55 season Johnny O'Brien his .299 in 84 games. But his average declined in '56 and the athletic O'Brien began to dabble in pitching. He was more or less a full time pitcher in 1957 with mixed success. Ironically he had his best batting average (.314) that same season.
That season marked the end of his experiment as a hurler. He made one more mound appearance after the '57 season. His brother Eddie had also pitched a bit for the Pirates during their mid-fifties tenure there, making 5 cameos on the mound.
The Pirates dealt him to the Cardinals in 1958 and he split that season between the majors and minors and found himself in Milwaukee for 1959, his last big league season. Another minor league season and O'Brien hung up his glove(s).
The O'Brien brothers had played basketball at an All American level at Seattle University previous to their major league days. On a memorable day in 1952 the collegiate club played (and won) an exhibition contest against the Harlem Globetrotters. That short article I linked is worth the read, great stuff.
My copy of the card is seriously miscut but has sharp corners and really looks as new as any card in my set. But how about that Braves cap logo? Looks like the Topps artist added it with a pencil. Geez.
Here's a bonus card, the Topps 1954 O'Brien card featuring both of the twins. How cool is that? 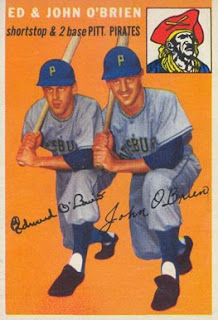