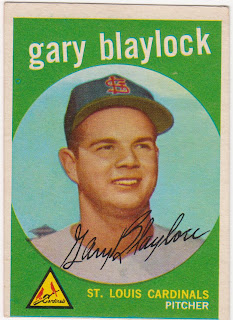 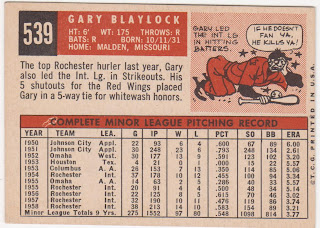 After toiling in the Cardinals organization since 1950 Gary Blaylock made the big club out of spring training in 1959. He began the year in the starting rotation and had a decent start to the year. He had a 3-1 record and an ERA of 2.60 when things went south in late May.
After a few bombings Blaylock lost his starting job and his ERA rose to over 5.00 before he was waived in late July. He was picked up by the Yankees and finished the season in their bullpen. Unfortunately (for Gary Blaylock) 1959 was one of the few seasons during that decade that the Yanks didn't get to the World Series. Blaylock was out of the majors after '59, pitching in the minors for Yankee farm clubs through 1963.
Blaylock coached and managed in the minors following his playing days and made a one game appearance as a player/manager in 1966.
Two more Gary Blaylock facts:
This is a high number '59 and one of those color-enhanced black and white shots that are pretty common in the set, particularly among cards of the lesser known players. It's really off center but has nice corners and color. Looking at the card Blaylock looks like Larry Dierker to me.
Posted by Commishbob at 7:44 AM