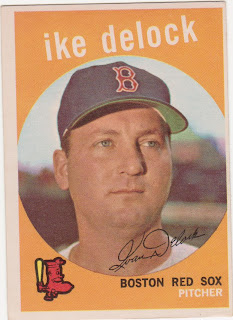 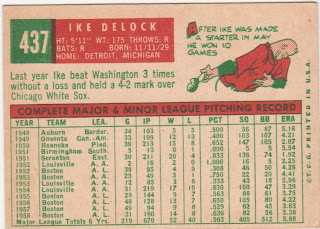 When I was a little kid I always thought Ike Delock looked like the Red Sox logo 'sock guy'. I know that's stupid but hey, I was 8 years old.
After a series of impressive minor league seasons Delock debuted with the Red Sox in 1952. Following a few  years of shuttling back and forth between Boston and their AAA club in Louisville Delock was in the bigs for good in 1955. His first season was split between starting and relieving and he won 9 games.
Then he landed a full time bullpen gig and saved twenty games for Boston over the '56 and '57 seasons, leading the league in that catagory in '57 with 11. Jumping back into a starters role in 1958 he remained a mainstay of the Bosox staff into the 1963 season when he was released and the Orioles in June of that year.
I'd completely forgotten that Delock spent a little more than a month with the Orioles in 1963. That month was his last in the big leagues. Delock was selected as #77 on a list of the 100 Greatest Red Sox players in 2007.
I'm struck by two things. First, that's not a bad copy of his '59 card, clean with pretty decent corners. Second, he does kind of resemble the 'batting Sox logo'!
Posted by Commishbob at 7:58 AM