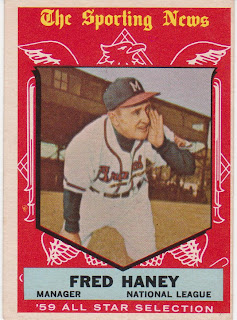 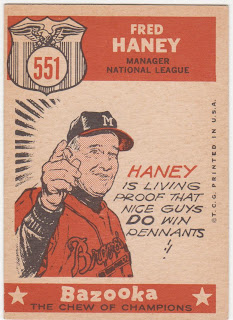 Fred Haney began his baseball career in 1918(!) as a member of the PCIL's Portland Buckaroos. 39 years later he managed the Milwaukee Braves to a World Series title in seven games over the Yankees. In between he played quite a bit of minor league ball in Los Angeles with the Hollywood Stars and original Los Angeles Angels, played 622 major league games, mostly as an infielder for the Tigers and Red Sox, managed in the minors, managed the Browns and Pirates and broadcast games for the LA Angels of the PCL.
With the Braves he earned two world Series trips in three seasons, winning the '57 title as mentioned. His Braves, featuring Hank Aaron, Eddie Matthews, Warren Spahn, et al, returned to the Series in '58 only to lose to the Yanks. That trip earned him an All Star Game managerial gig in '59 and this terrific baseball card.
He was fired after the 1959 season for the grave mistake of tying for first place with the Dodgers in the NL and then losing in a playoff thus dropping his chance for a third consecutive World Series. Tough deal, I'd say.
Haney landed on his feet though. Hired on as the first general manager of the expansion Los Angeles Angels after a short gig broadcasting games for NBC, Haney got to work in his hometown once again. His final job was as a consultant to the Angels in the late 60s.
This is a favorite of mine from the '59 set. I don't hide my love of the Braves unis, the card is in nice condition (relative to most of the other higher numbers I own) and how can you NOT love the 'nice guys' reference on the back?
I couldn't resist adding a couple of pictures of Fred. Call it a salute to a baseball life well lived.
First here is Fred Haney wearing the Hollywood Stars (in)famous short uni pants. This was long before the White Sox made the same mistake. 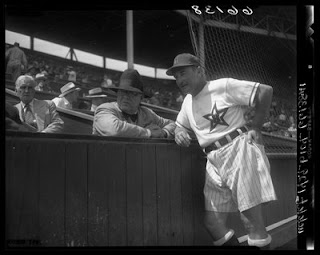 And finally a great dugout portrait of a baseball lifer: 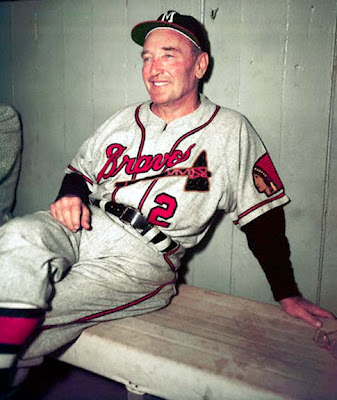 Posted by Commishbob at 8:01 AM