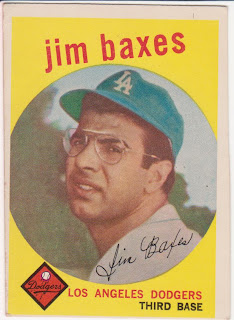 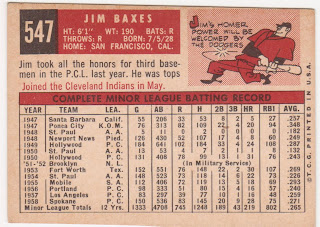 The other shoe drops as we look at Jim Baxes, older brother of yesterday's featured Mike Baxes. Like his brother Jim Baxes had a limited career in the big leagues but got plenty of minor league work, Boy did he ever.
From 1947 through 1961 he traveled through more towns than a circus train. All his stops were in the Dodger chain. His one year of major league service came in the year this card was issued. In '59 he opened the year with the Dodgers and was traded to the Indians in May. For the season he batted .246 but hit 17 homers. Not bad, and good enough for Topps to pick him as their 3rd baseball on the All Rookie Team. 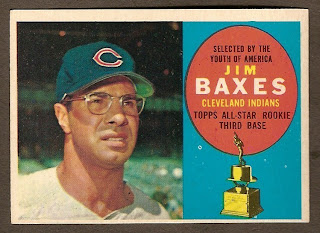 But it was back to the bushes in 1960 for Baxes. And after the '61 season he retired.
BTW... Jim Baxes tried his hand at pitching in a 1950 game for the Hollywood Stars (managed by the recently featured Fred Haney!). The Los Angeles Times has an archived story and a fabulous picture of Baxes (wearing uni shorts!!) getting drilled with a pitch in that game. I'll reprint the picture below. Check the link for the story and to see the picture full size. Pretty cool.

Here is a view of that shot as colorized by a contributor to Paul Lukas' Uni Watch blog. Full size shot is here.

Posted by Commishbob at 7:18 AM