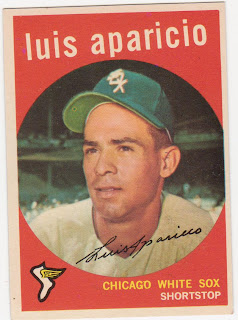 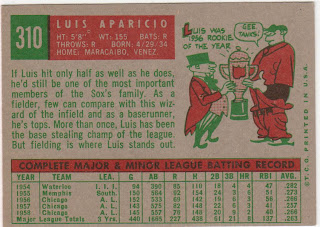 There was a lot of debate on Luis Aparicio's Hall of Fame credentials when he came up for consideration. All I know is that I'd have voted for him but then again I'm an Oriole fan and Looie helped lead the O's to the 1966 championship.
I'll just post some numbers and let it go at that. The following paragraph comes from The Baseball Page:

The bolding is mine. I'm impressed. And you can add in the 1956 Rookie of the Year award. Jerome Holtzman of the Chicago Tribune voted for Aparicio as part of the All Century team.
Aparicio debuted in 1956 with the White Sox, helped them gain the '59 World Series and batted .308 in that Series. He was traded to the Orioles for the 1963 season after having led the American League in steals every year he had played in Chicago. His defensive skills played a part in the Orioles 1966 title and then following the '67 season he was back with the White Sox. He spent the last three years of his career in Boston, retiring after the '73 season.
The White Sox retired Aparicio's #11 but Omar Visquel was allowed to bring it out of mothballs when he arrived to finish out his career with the Sox. It was a tribute to Aparicio.
Seems like every White Sox card is red framed. I think it looks good with this nice, color enhanced portrait. Mine has pretty good corners and it's still shiny and bright. Go Go Looie!
Posted by Commishbob at 7:45 AM