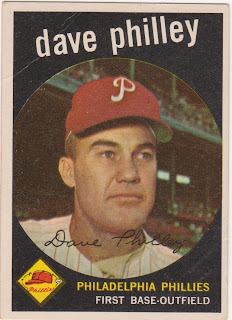 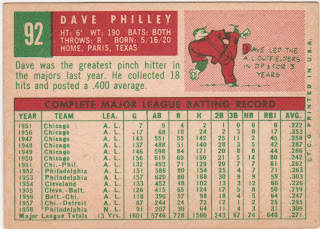 It's Dave Philley on the Phillies! Known late in his long career as a premier pinch hitter, Philley broke in with the White Sox in 1941. After a stint in the military and some minor league work, he stuck with the Sox in 1946. He held a regular outfield slot in Chicago showing a touch of power and a bit of speed. He was traded to the Philadelphia A's as part of a three way trade also involving the Indians in 1951 and continued as an everyday there through 1953.
In 1954 he was traded to the Indians and, after picking up a hit in the '54 Series, in 1955 he was sold to the Orioles in one of six midseason transactions between those two clubs. In just half that season in Baltimore he played well enough to be named the team's MVP.
Traded back to the White Sox in 1956 Philley began an odyssey around the majors that brought him to San Francisco, Detroit, the Orioles (again), the Phillies, Houston (signed and traded in the same day by the Colt 45s) and finally the Red Sox.
He set a record for consecutive pinch hits when he ended the 1958 season with eight straight and had another on Opening Day of 1959 for a total of nine. His 24 pinch hits with the '1961 Orioles also set a record. Philley managed for several years in the minors after his playing days.
This card boasts the black frame (cool!) and what I believe to be Connie Mack Stadium in the background (different!). Overall it's in nice shape. Best of all I learned quite a bit about a guy with a long and solid big league career. And about his place in Orioles' lore.
Posted by Commishbob at 8:27 AM