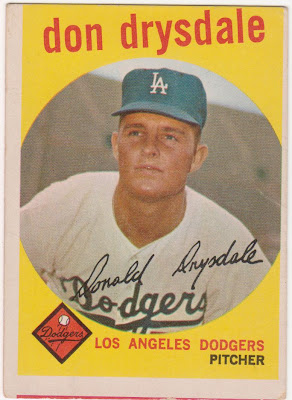 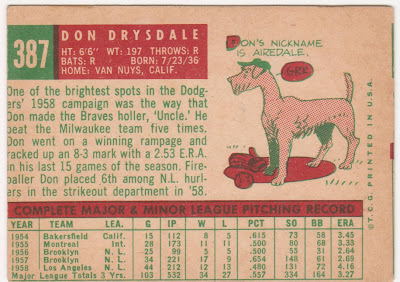 In 14 season with the Dodgers, stretching from 1956 in Brooklyn to his retirement following the 1969 season in L.A., Don Drysdale won 209 games. But he did much more than that. He established himself as a workhorse by leading the NL four times in starts and twice in innings pitched. He cashed in on his 'made for Hollywood' looks and made numerous TV and a few movie appearances. He led the NL in strikeouts three times, won a Cy Young (1962 when he had 25 wins), won three World Series titles and three World Series games and made eight All Star teams. In 1968 (his next to last season) he established the record for consecutive scoreless innings with 58 and 2/3 covering six games.

But what liked best about Drysdale was his reputation as a certified bad ass on the mound. If you dug in at the plate Drysdale was likely to knock you on your butt. He led the league in hitting batters five times and was second four more times. That's bad ass. Him and fellow bad ass Sandy Koufax famously held out together in 1966. It was a really big deal at the time.

Drysdale was also a pretty fair hitter and not just among pitchers. He had 29 homers in his career, twice hitting seven in a season. He frequently would bat eighth in the order for the Dodgers. After his retirement as a player he entered into a broadcasting career that included stints in ABC's national booth and with several teams including the Dodgers. He showed his versatility by working numerous non-baseball assignments including LA Rams broadcasts alongside Dick Enberg.

Don Drysdale was elected to baseball's Hall of Fame in 1984. This is no Hall of Fame copy of his '59 card. Severely miscut and a touch worn overall. But don't mention it to Drysdale, he'll knock you on your ass.
Posted by Commishbob at 8:14 AM