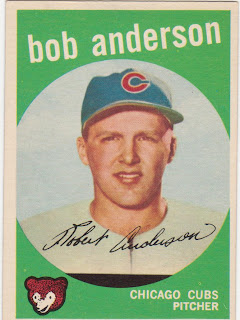 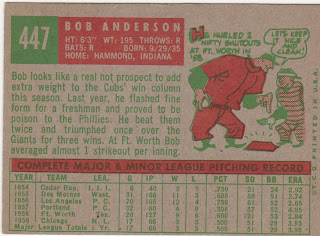 See the black space under Bob Anderson's mug? It appears to be the top of a mug shot placard but I'm sure it was just that Topps had cropping problems with this one.
Anderson pitched for the Cubs for six seasons, primarily as a starter. '59 was his best year as he won 12 and pitched seven complete games. On July 1st of that year he was involved in a weird play that involved two baseballs, the field announcer, Stan Musial and an ump. Rather than re-explain it I'll just quote Bob Anderson's Wikipedia page:

Bob Anderson was involved in one of baseball history's weirdest plays. It occurred during a game played on June 30, 1959 , between the St. Louis Cardinals and Chicago Cubs. Stan Musial was at the plate, with a count of 3-1. Anderson's next pitch was errant, evading catcher Sammy Taylor and rolling all the way to the backstop. Umpire Vic Delmore called ball four on the pitcher, however Anderson and Taylor contended that Musial foul tipped the ball. Because the ball was still in play, and because Delmore was embroiled in an argument with the catcher and pitcher, Musial took it upon himself to try for second base. Seeing that Musial was trying for second, Alvin Dark ran to the backstop to retrieve the ball. The ball wound up in the hands of field announcer Pat Pieper, but Dark ended up getting it back anyway. Absentmindedly, however, Delmore pulled out a new ball and gave it to Taylor. Anderson finally noticed that Musial was trying for second, took the new ball, and threw it to second baseman Tony Taylor. Anderson's throw flew over Tony Taylor's head into the outfield. Dark, at the same time that Anderson threw the new ball, threw the original ball to shortstop Ernie Banks. Musial, though, did not see Dark's throw and only noticed Anderson's ball fly over the second baseman's head, so he tried to go to third base. On his way there, he was tagged by Banks, and after a delay he was ruled out.

Here is a fun newspaper account of the shenanigans complete with a hand drawn diagram of all that transpired. How often do you see that sort of illustration nowadays?

Oh, BTW, Bob Anderson went on to complete his career with a one year stint with the Tigers and a year in the A's chain. He was 36-46 for his career.

The rumor that the black bar across his chest is the top of an intake mug shot placard is untrue. My copy is about as nice as I have among the set's commons. It's an upgraded one.
Posted by Commishbob at 7:49 AM