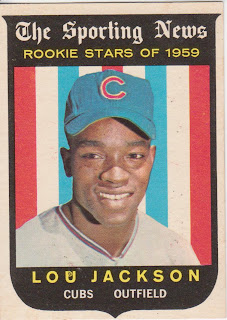 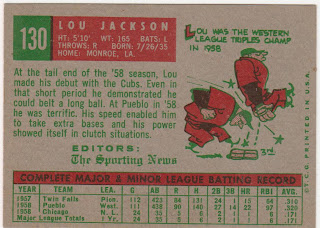 Impossibly young looking Lou Jackson had three cups of coffee as an outfielder in the bigs. He debuted with the '58 Cubs with 35 at-bats including his only homer, was recalled in September of '59 and then headed back to a journey through the minor leagues. He played in the Reds and Braves organizations before he re-emerged with the Orioles in 1964. Just a handful of at-bats later Lou was out of the majors for good.
He ended up playing in Japan following his stint with the Birds and a couple of seasons with their AAA Rochester farm club.
I can't sum up Jackson's Japanese career as well as his Bullpen page on Baseball Reference:

In '68, Jackson collapsed at home plate one day. He struggled statistically that season, hitting .219/.269/.367. The next year he died of pancreatitis. An alcoholic, he was known as a hustling, defensively-minded outfielder.

WTH? That doesn't warrant a bit more elaboration? Guess not.

Anyway, Jackson DID appear to lead a  grueling life while his career whizzed past. Want proof? Compare his visage above with this pic:

Is that the same guy?
My scan cut off the left side of this card so it's better than it looks. One of my better Rookie Stars cards.
Posted by Commishbob at 7:39 AM