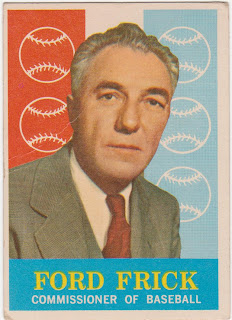 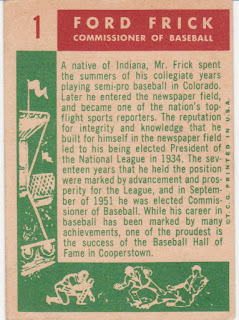 Like pulling the Warren Giles, getting a card of Ford Frick must have been a terrible buzz kill for a kid opening a pack in 1959. I mean who wants a card of a guy who looks just like your pediatrician?
Ford Frick was a graduate of DePauw University and he is inducted in their Athletic Hall of Fame. He became a fairly well known sportswriter and ghostwrote (is that a word?) articles for Babe Ruth, a job that would figure prominently in the biggest decision of his career as the commissioner.
Frick served as NL president for many years before getting picked for the top job in the game. He became well known (notorious?) for his decision to place and asterisk on Roger Maris' 61 homer record in 1961. That decision allowed Frick's buddy Ruth to retain at least a version of his single season home run record. He's a member of the Hall of Fame.
Tons of info on Frick is available on the web. Check out these bios if interested and a YouTubed appearance he made on TV's What's My Line.
His card is #1 card in the set and as such commands a premium if found in nice condition. That's due I'm told to the 'kids rubber banded their stacks on cards back then' factor. My copy is pretty good actually. Some corner wear but the centering isn't terrible and the colors remain bright. It's a nice looking but boring piece of 1959 cardboard.
Posted by Commishbob at 7:26 AM