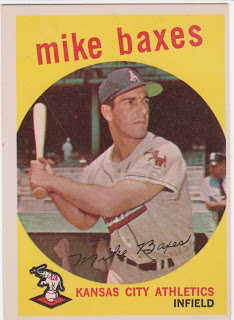 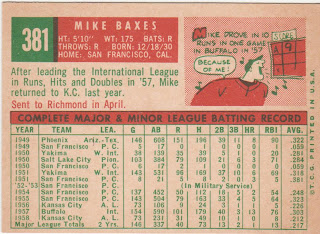 Mike Baxes was primarily a career minor leaguer who got two shots with the Kansas City A's, first in 1956 and again in 1958. Between and around those half seasons of big league work Mike Baxes was the property of at least four major league clubs.
Mike hit .217 in his 146 games and had one homer, a shot off Hal Griggs in Washington on June 11, 1956. The year this card was issued, 1959, Baxes spent with Richmond, the Yankees AAA club. He was finished playing after the 1961 season.
Nothing special about the card other than it's being in pretty nice shape. Mike's brother Jim has a card in the '59 set which is coming up tommorrow.
Posted by Commishbob at 8:08 AM