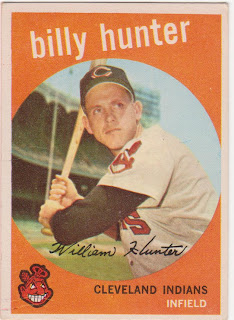 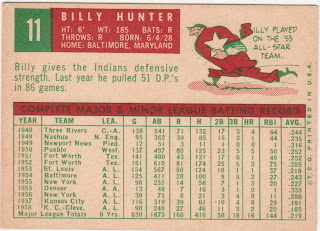 Billy Hunter was originally signed by the Brooklyn Dodgers in 1948. But when you can't hit a lick and Pee Wee Reese is ahead of you on the organizational depth chart you are probably better off somewhere else. Like with the St. Louis Browns. And so it went for Hunter. He debuted with the Browns in 1953 and, despite an anemic bat, made the All Star team in the AL.
Hunter moved along to Baltimore with the Browns franchise in 1954 and spent a year as the Orioles' regular shortstop. In November of that year he was dealt to the Yankees in a giant transaction that ended up involving  17 players all told. I believe that's the biggest ever.
Two years later he went where darn near all Yankees went in the 50s, Kansas City. The trade that got him to the A's involved 13 players. So, if you are keeping score, Billy Hunter was traded twice within a bit over two years, in deals that included 30 players. Jeez.
A season plus with the A's produced more good fielding, no hitting action and Hunter was traded to Cleveland in June of '58. He never made it back to the majors as a player after that stint with the Tribe. He had a .219 lifetime average.
But Hunter never left the game. After serving as a coach (notably for the Orioles for many years) Hunter managed the Texas Rangers in 1977/78. He was fired at the end of the '78 campaign for his poor player relation skills. Pitcher Dock Ellis famously compared the old school Hunter to Hitler. After his managing stint in Arlington Hunter expressed disillusionment with the pro game and became head baseball coach and athletic director at Maryland's Towson State University, retiring in 1995. He's a member of the Orioles' Hall of Fame.
In this '59 card Hunter is pictured with the Yankee Stadium left field upper deck and facade in the background. That's a familiar sight in a lot of these cards. In fact the left field seats in Yankee Stadium are so often seen in vintage cards of this era that the guy behind the Carl Crawford Cards blog has featured quite a few and formed the Left Field Hall Of Fame. LOL
With the orange frame, the old school Indian uni and the Yankee Stadium background I think this card is among the most '1959-ish' of the 1959 set.
Posted by Commishbob at 8:10 AM