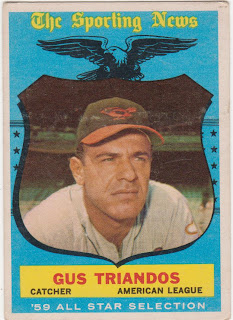 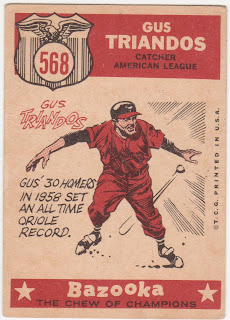 The first 1959 All Star game marked Gus Triandos' third consecutive All Star appearance. In that game he doubled and drove in two runs off Pittsburgh's Elroy Face. He did n't play in the second of that year's games. Triandos was coming off his best season as far a homers were concerned. He had hit 30 to set the O's team mark as this cardback states. Probably didn't hurt that the Memorial Stadium fences came in that season.
In any case Gus Triandos was the Orioles' star player in their first half decade in Baltimore.
Posted by Commishbob at 7:40 AM