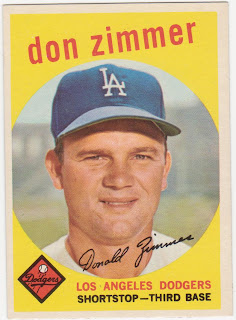 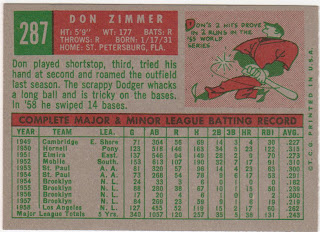 Don Zimmer has become a cottage industry in a manner of speaking. His popularity during the last twenty years of his baseball life far surpass anything he enjoyed while playing. He's picked up a few colorful nicknames along the way including 'The Gerbil' and 'Popeye'.
Zim broke in with the 1954 Brooklyn Dodgers, and stayed with the club through a couple years in L.A. He moved to the Cubs where he made his only All Star team in 1960. He was drafted by the Mets in the expansion draft of 1962. Following his time with Casey Stengel (I bet that was fun) he had a couple of short stints with the Reds and Dodgers (again) and finished with three seasons in Washington. With the Senators he had the same role he'd enjoyed his whole career, playing a bit of everywhere in the infield.
A year in Japan and a stint in the minors in 1967 ended his playing career. Then he began coaching in the minors and for a short time in the bigs before beginning his managerial career with the Padres in 1972. He managed four big league clubs, the Red Sox, Rangers and Cubs amassing an 885-858 record and winning a pennant with the 1989 Cubs and being named Manager of the Year in the NL. Zim was on the wrong end of the 1978 pennant race in which the Yanks won a playoff game over Boston with the (in)famous Bucky Dent homer.
He spent many years as a coach in the majors between and following his managerial jobs.
The famous 2003 playoff confrontation with Boston star pitcher Pedro Martinez cemented his play in baseball lore.
Love how young Zim looks in his '59 card. That's the Memorial Coliseum in the background. Topps used the same shot in 1960 and the stadium is a bit more clearer to see in the background. My copy of Zim's card is clear and bright. A bit off center but pretty sharp copy, especially for my collection. 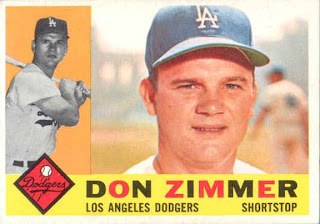 Posted by Commishbob at 7:31 AM