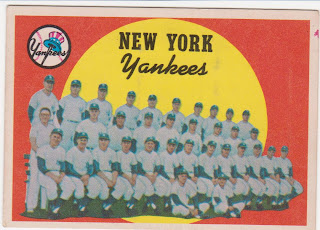 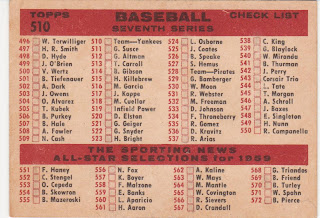 Leave it to the Yankees to have a team shot taken at an angle. I don't think I've seen any other club do this. The 1959 club was coming off the '58 World Series win over the Braves. They fell off to 79-75 and finished in third behind the White Sox and the Indians. A long way behind, 10 back of the Tribe, 15 out of first.
Lots of things seemed to work against the Yanks in 1959. It was one of only two seasons under Casey Stengel (the other being 1954) that they did not finish first. Mickey Mantle had a sub par year, hitting 31 homers but only .285. Whitey Ford led the club's staff with 16 wins. The Yanks turned it back around in 1960 and all was well again in the Bronx.
When I was a kid the 4th of July usually meant one thing... and it wasn't firecrackers. It meant a trip to Yankee Stadium for a doubleheader with my Dad. I don't remember the Orioles ever being the visitors on the Fourth or on Labor Day either which was the other summer doubleheader tradition we had.
The back of this card looks better than the front, at least in terms of condition. It's clean and unchecked while the front is a little scruffy. I like the scheme though. And as much as I hate to admit it, I like the classic Yankee top hat logo.
Happy Fourth, everyone!!
Posted by Commishbob at 7:44 AM