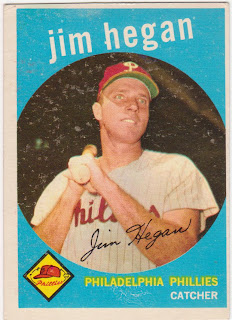 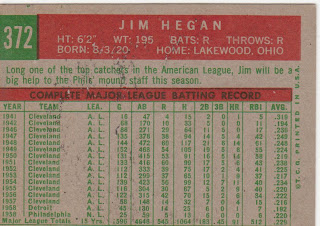 If this really is a Phils uni on Jim Hegan (and not an elaborate and really good airbrush job) than the pic was taken in 1958 after he came to Philadelphia. That would make him 37. That's not old but he sure looks younger than that, no?

Hegan began his big league career in 1941 with the Indians and hit .319 in 18 games. He never came close to matching that. Following another partial season with the Tribe and three years serving in the Coast Guard during WWII Hegan established himself behind the plate and was known as a master behind the plate. He combined quickness and smarts to help Cleveland to two American League Championships (1948 and 1954). He helped them win a ring with a Series title over the Braves in '48.

Even though he never was much of a hitter he was a good enough backstop to make five All Star games in the  40s/50s. And every single Hegan bio contains quotes from members of the famed Indians' pitching crew of that era praising his ability and giving him credit for much of the club's success.

Hegan caught three no-hitters and garnered some MVP votes along the way indicating the regard he was held in despite his weak hitting.

At the end of his long career he toured for brief spans with the Tigers, Cubs, Giants and, obviously, the Phils. He's also known as Mike Hegan's dad.

My copy has some scuffing and is way off center. But the blue frame is sweet.
Posted by Commishbob at 7:46 AM