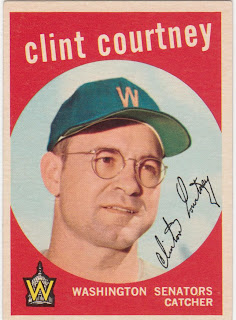 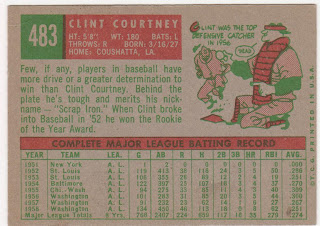 I tend to think of Clint Courtney as an Oriole but that's because he was part of their club when I first really began to follow the game, 1960 or so. But 'Scrap Iron' was around almost a decade prior to that and he actually did the bulk of his playing in Washington with the Senators.
Always known for his hard nosed style that belied his bookish looks, Courtney came up as a Yankee signee in 1951, playing one game before being dealt to the Browns for the '52 season. He was runner-up in the Rookie of the Year chase that season. He held down the Brown's catching job and held it through the franchise's first year in Baltimore.
The O's traded him to the White Sox and he was dealt again to the Nats, all during 1955. In five seasons with the Senators he platooned behind the plate except in 1958 when he held the job himself and had personal bests in homers and RBIs.
It was back to Baltimore for 1960. It was during that stint that he pioneered the use of an over-sized catcher's mitt to handle Hoyt Wilhem's knuckleball. The glove was the brainchild of O's manager Paul Richards.

The O's traded him to Kansas City that winter but after just one game (one at bat!) with the Athletics he was returned to the O's where he lasted until July before being released.
Courtney turned to coaching after playing a couple more seasons as a minor leaguer. He works for the Astros as bullpen coach and then managed in the Braves' chain with sights on a major league job. He died in 1975 at the age of 48 before attaining that goal.
SABR has a cool bio of Clint Courtney. If you don't want to read it I'll show you the best part, this great picture of him in his Brownie gear. Gotta love that. His '59 Topps just 'says' Clint Courtney. You don't even have to see his name to know who that is if you followed 50s/60s baseball at all. I'm glad my copy of his card is pretty nice. Good color and decent corners. 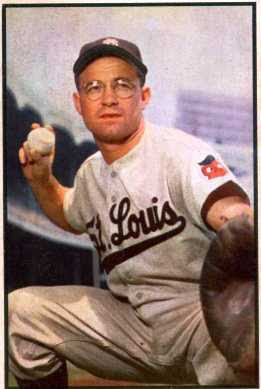 Posted by Commishbob at 7:04 AM